Part 2: How do I know if my house is haunted?

Last month, in Haunted Houses: Part 1, we discussed the four most common reasons why spirits attach themselves to houses and/or properties. This month we will cover the various ways to recognize whether spirits are attached to the property and how this could possibly influence the people who reside there.

People reach out to us for help with a variety of issues and problems: emotional pain, physical disease, family conflict, etc. The very first step toward helping someone is trying to determine when their problems began and what could have caused it. In some cases, we find that problems began right after someone moved into their new apartment or house.

New homeowners or tenants will start to sense something strange very quickly after moving into a place where spirits are attached. For instance, they may notice one or more of the following: unexplained knocking sounds in the ceiling or walls; lights turning on and off; household items or personal belongings disappearing and then reappearing; the appearance of shadows, orbs, or clouds of smoke; unpleasant odors; appliances and electronics constantly breaking; reoccurring areas of dirt on the floors and walls despite being constant cleaned; feelings of being watched or touched by unseen hands; hearing the voices of strangers; chills and fatigue; strange animal behavior.

The following is a case that we were involved with that demonstrates some of these unexplained phenomena:

James and Maria reached out to us for help after they purchased a new house. The house was  a fixer-upper, but since they received such a good price on the house, they had enough money for a renovation. However, once the renovation process began, they encountered one problem after another—bursting pipes, electricity shorting out, unexplained odors, and strange noises inside the walls. They blamed their construction crew so they hired a new contractor. Soon after the new crew began working, they abruptly quit. The couple went through one construction crew after another, but the house was still far from being finished. 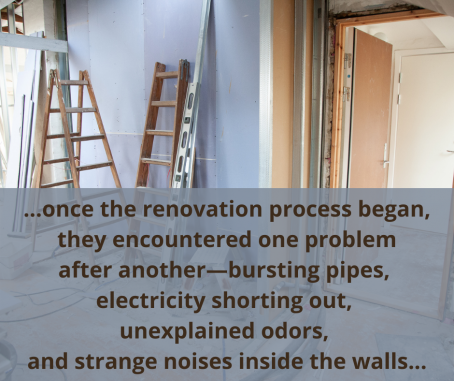 After we conducted a check-up on the property, we discovered that there were spirits attached to the home. It was at this same time that the new homeowners discovered the history of the house—over the years, the home constantly changed ownership.  Spirits not only bothered the young couple, but all the previous homeowners as well.

We advised them to stop any construction projects until the house had been cleared of spirits. Otherwise, they would continue to encounter problems which would only result in wasting their money.  Shortly after we started the removal process, the spirits left and never returned.

The young couple was fortunate that these spirits were willing to leave so quickly, because in some cases, spirits will not leave no matter how hard an exorcist might try to persuade them to move on.

Here is a perfect example of a case where spirits refused to detach themselves from a property:

Natalie, a talented hairdresser and businesswoman, reached out to us for help after she moved her salon into a new space that was just two blocks away from her previous shop. She had thought that the bigger modern-looking space would appeal to her current clients and also help attract new clientele, but she quickly lost most of her customers, both new and old.

Natalie struggled to keep her business alive.  She advertised in a local magazine and offered coupons but couldn’t attract any business. As a result, she began to suffer from intense anxiety, panic attacks and chronic fatigue. When she reached out to us for help, Natalie was considering closing down her salon not only due to struggling financially, but also because of the emotional and physical burden. At that point, when we conducted a check-up, we found not only spirits attached to the property where her salon was located, but also to Natalie. It was possible that the stress of the struggling new salon could have opened her to spirit attachments. However, the most likely scenario was that the spirits who were attached to the salon attached themselves to Natalie as well.

Spirits who are attached to properties will sometimes also become attached to the new home owner or business owner. From the moment of attachment, a person becomes apathetic, sluggish, and may start feeling physically ill. You can find full list of symptoms HERE.

Often times spirits are convinced that a property belongs to them, and they will work to push away anyone who wishes to enter it. People can sense this by feeling uncomfortable in the property, and as a result, don’t wish to ever return.

Before you commit to purchasing a new home, apartment, or business, try to spend some time at the property to see whether the energy of the home or business feels right. If you are uncertain, you can always ask a skilled professional to conduct a check-up.

Here is an interesting article from the New York Times, entitled Haunted House Ghost Quarantine.  Since the pandemic has forced people to stay at home and slow down, some have started to notice paranormal activities inside their house.

How to Protect Yourself from the Influence or Return of Spirits?

We are often asked what to do when a spirit tries to influence living persons. This is a very important question, because how we approach this issue determines whether we will succeed in distancing ourselves from the spirit or will actually further strengthen...

Why Don’t Souls Go to the Other Side After Death? Part 3

One sizeable group of souls who have not departed into the hereafter are those who have a great deal of self-blame, although they are most often unaware of this. Their subconsciousness remembers that they have done something that is wrong...

Why Don’t Souls Go to the Other Side After Death? Part 2

Why Don’t Souls Go to the Other Side After Death? Part 1

In today's post we will consider the question of why souls who have already put aside their physical bodies do not pass to the other side, but continue to stay close to the physical plane. In order to understand this properly, it is essential to understand that...

Many people who come to us for help do not realize that it was shortly after the death of a loved one that their lives started to turn into a nightmare. At first glance, you might think that it turned into a nightmare because they lost a loved one, but the opposite is...

Death of a Loved One and the Danger of Spirit Possession

When someone really close to us dies, someone to whom we were strongly emotionally connected and to whom our whole life was connected, we may feel as if we had suddenly run out of air and the ground collapsed beneath our feet. It does not much matter...

Do You Need Help?
Call to free yourself from ghosts, emotional/mental disturbances, illness.

If you are in a crisis or any other person may be in danger - don't use this site. These resources can provide you with immediate help.