The subject of the book could be a panacea for very many of our world's misfortunes. From various states of mental disturbance, deviations, dependencies, severe psychiatric illnesses including those requiring isolation, through to chronic diseases or those that are considered to be incurable.

The question of ghosts also applies to various everyday situations like the demanding behavior of a family member, difficulties with learning, with people close to one, work colleagues or business associates. They often lead to helplessness, loneliness, isolation, or to difficult financial, health and social situations.

What is a frequent cause of various diseases, misfortunes, lesser or greater failures? How can one deal with them, how can one guard against them in the future?

THAT'S WHAT THIS BOOK IS ABOUT

It is also a reply to the endless questions asked by people turning to me for help. They often believe that the things that have happened to them are unique, they happened only to them. They wonder why they are suffering so much. They think that maybe they did something bad and that now they're being punished. Or maybe it's the work of some curse or black magic.

Do you often happen to experience:

If the answer is yes, then this book is for you. In it you'll find answers to questions that may well have been bothering you for a long time. It could be that you have been wandering in the darkness and that this book will show you the real causes of your troubles a dependency on the influence of ghosts on your life, that is beings which have died and, after death, have not resolved to leave for the other world.

Wanda Pratnicka's book describes an unacknowledged problem with which a big part of mankind is struggling, namely possession by ghosts. Ghosts are the souls of people who have died but who have not resolved to pass through to the other side of death's curtain. By remaining among the living they are the cause of severe anxiety, depressions, mood swings, explosions of negative emotions, mental illnesses and often also of physical illnesses. This happens because the illness of the ghost is in most cases carried over onto the person possessed. Despite appearances, possession is a quite frequently occurring phenomenon.

In today's society we therefore have to deal with a situation where very many people suffer from emotional disturbances. Yet the source of this state of affairs remains completely unknown. And that is because psychology and psychiatry reject the existence of such beings as ghosts. This book, however, reveals that it is ghosts who are responsible for a great deal of suffering in today's societies. Dr. Wanda Pratnicka has in the course of over fourty five years of therapeutic work helped tens of thousands of people who were influenced by ghosts. She has, therefore, a demonstrable right to consider that an increase in the awareness of these matters (and especially in Western culture) could well bring relief to a large number of people. The book describes clearly, simply and transparently the causes of the dependencies that arise between people and ghosts and also indicates methods of healing and of avoiding such dependencies in the future.

"Whether or not you believe in ghosts, the paranormal or reincarnation you owe it to yourself to read Wanda Pratnicka's book Possessed by Ghosts: Exorcisms in the 21st Century. At first you might be skeptical but, as you begin to read, you become immersed in the reality of ghosts and the belief in G-d that has obviously sustained Ms. Pratnicka throughout the years" (BookIdeas.com)

"Possessed By Ghosts: Exorcisms in the 21st Century outlines some very unique theories about ghosts and their activities after their deaths. The author believes that ghosts purposefully or unwittingly can and do actually cause potential harm, disease, and death to live individuals" (Blether.com)

"Possessed By Ghosts," written by renowned exorcist and healer, Wanda Pratnicka is a work where our author opens her heart to you, and shares many years of her experience with freeing not only those troubled by ghosts, but the ghosts themselves.. Bridging this world with the next, she explains how she believes those departed influence our lives and often cause sickness and mishap" (MidWestBookReview.com) 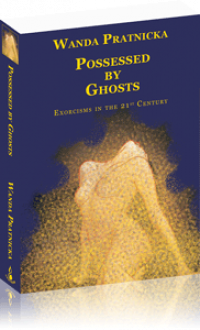 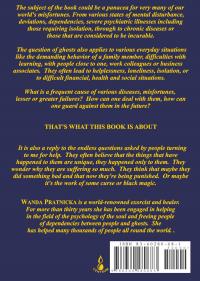 Do You Need Help?
Call to free yourself from ghosts, emotional/mental disturbances, illness.

If you are in a crisis or any other person may be in danger - don't use this site. These resources can provide you with immediate help.